In February 2004, a regional newspaper in the St. Gallen Rhine Valley published a company portrait about SAWATEC AG.

It was mentioned that father and son opened their company SAWATEC AG in 1996 by merging their two companies. Harry Sawatzki’s company made a name for itself by producing prototypes for the NTB in Buchs, Switzerland, and Bruno Sawatzki was successful with his own design office. “Together we are stronger,” Harry Sawatzki explained the motive for this move.

Already at that time, SAWATEC AG distributed 40 of its own products worldwide. New products have been added year after year and numerous patents were produced, which underlines the high innovation ability.

Read the whole newspaper article here (only available in German). 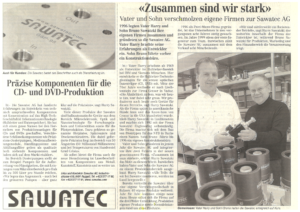 We use cookies on our website to give you the most relevant experience by remembering your preferences and repeat visits. By clicking “Accept”, you consent to the use of cookies.
Accept
Manage consent

This website uses cookies to improve your experience while you navigate through the website. Out of these, the cookies that are categorized as necessary are stored on your browser as they are essential for the working of basic functionalities of the website. We also use third-party cookies that help us analyze and understand how you use this website. These cookies will be stored in your browser only with your consent. You also have the option to opt-out of these cookies. But opting out of some of these cookies may affect your browsing experience.
SAVE & ACCEPT
Powered by